If you look at the whiteness of the snow on 2,000 metre peaks over a bowl of just as white homemade soured milk, the view is even more worth admiring. If you want such a tasty view of the Savinja Alps, you will have to get first to the village of Solčava and the beautiful Panoramic Road. Hospitable tourist farms which stand over meadows are threaded along this winding road as if on an idyllic necklace.

The Žibovt tourist farm awaits you at the end of the Panoramic Road, which can be reached fastest from central Slovenia through the villages of Preddvor and Jezersko, then over the defunct border crossing between Slovenia and Austria to the Pavlič Pass, and then again get on the Slovenian side, near the Solčava Panoramic Road. Covnik, Žibovt and Šumet are the first farms at this end of the road, which is not called panoramic without reason. If you happen to have an opportunity, do not forget that this area is not only famous for an iron water spring, where you can even find a dipper for drinking, but also for SolËava marble, an extremely beautiful stone which decorates many facades, and for the acknowledged stonecutting art and craft of the Šumet family.

At the entrance to Žibovt, which is kept by Jure and Jasmina Poličnik, on the right side is a brook running into a domestic fish pond, or rather a trough, as you can spot in the village free roaming cows right after the corner. Žibovt is an ecological farm of 59 hectares, which is enough for all the food put on the table to be produced here. Houses and farm buildings stand like on an open palm on a green meadow, which starts gradually descending immediately behind the house. A cluster of birches and a bench on which you can sit and think invite you for a walk in every season. The birches rustle greenly in the summer and gold in the autumn. And sour milk is as white as always. And it is still organic and homemade as always, which is rarely the case with this Slovenian shepherd’s and farmer’s meal. You cannot even make it from commercial milk, as it becomes bitter rather than sour. The right sour milk is hard as pudding, it shivers slightly in a bowl, can be “cut” with a spoon and is covered with a thin layer of sour cream. Ordering buttered homemade buckwheat dumplings, or square homemade buckwheat bread with walnuts together with sour milk is a must, and both worth the sin. But this happens hopelessly rarely nowadays. You will frequently stop eating to observe the charming range of the Savinja Alps, as the peaks of Raduha, Ojstrica, Planjava, Brana, Turska gora, Skuta, Dolgi hrbet and Grintavec stretch ahead of you, as you enjoy yourself on the terrace, if your glance goes from left to right. Everithing regarding food and accomodation is under the loving hands of Jure’s parrents Martina and Žarko.

Hiking, and in the time of modern tourism mountain biking, is at home here, and also down in the Logarska valley, which is a tourist mecca.

You can also spend a night at Žibovt. The rooms are first class, and a walk to the iron spring alone will fill you with the will to empty your plates. The kitchen follows both the seasons and tradition. As Savinja želodec is a famous dish in the Upper Savinja Valley, it may happen that you come across a sign ‘Kosilo-želodec’ (Lunchstomach) in front of a restaurant, without having a clue why Slovenes have to explain that lunch goes right into this organ. This is why you have to see which stomach they have in mind. At Žibovt, želodec is prepared in thin dry slices, accompanied with homemade cheese and dried fruit – the farm has a fruit-drying house. Dried pears are a beautiful accompaniment to light, soft homemade cheese. Žibovt is a ‘cheese’ farm in general, as cheese is made here in various forms and has brought an award or two (for example, for so-called young boiled cheese). The cheese with ramson leaves, or wild garlic, is for gourmet tongues, while the cheese with green pepper is for those fond of stronger flavours. Smoked homemade cheese in tiny beads with a slightly brown crust can also be taken home.

Nettle soup, the best portion of vitamin C, many times finds its way to the table in the spring. Guests also praise the homemade žlikrofi, dough ‘pockets’ with various fillings. Veal stew is excellent, accompanied by buckwheat dumplings, an unavoidable Slovenian side dish. In addition, the lady of the house always makes rich homemade breakfasts and dinners with diverse homemade recipes. If you stay for a few days, you will be offered half-board, because they do not make lunch. But if you drop by at noon, you will surely find something. Most certainly, Alpine pie, which could not be named differently when coming in a package with such a panorama of mountains. A bit of dough for the shape and lots of cottage cheese filling, with a touch of homegrown fruit – apples or bilberries, raspberries, cherries, and other things nature brings. Nobody can resist this sweet temptation, so simple, natural and juicy. Visitors also praise Žibovt’s homemade jam, and this is why it pays to spend a night here and try jam for breakfast. It’s not that you wouldn’t be offered it otherwise, if you ask for it.

A tourist farm is primarily a farm, and farm work does not wait, which is why they have their rules. Žibovt is open from mid-April to the end of October, and if you want to enjoy their domestic cuisine, it would be better if you booked. Otherwise it may happen that you will have to manage with soured milk, buckwheat bread, cheese plate, Savinja želodec and Alpine pie. And the magnificent view. Would that be enough?

And this: you can get to the Solčava Panoramic Road from the other side, if you go from Ljubljana on the Štajerska motorway and exit at Mozirje, continue along the mostly renovated, though at certain parts still rather narrow road to Ljubno, Luče and Solčava, and when you reach this village, turn right towards Podolševa and then to the left towards the Panoramic Road. Now you join the Panoramic Road, with Žibovt at its other end. Above you is Mt. Olševa, with the famous Potočka zijalka cave, with the remains of the ancient dwellings of people who had to fight for their habitat against cave bear. Cave bears are no more there, but the cave still awaits you, if you are ready to trek uphill from Rogar for about an hour. This will be an experience after which Žibovt’s (Rogar’s, Klemenšek’s…there are a number of farms) homemade food will taste even better! 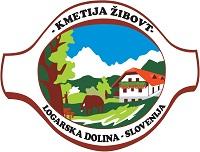